Dashing through the snow, my golden retriever was having the time of his life. As his paws tossed snowflakes in every direction, his jaw opened and closed frantically to try to catch it all. He rolled around on the cold ground and then nuzzled tiny snowballs. Teddy, in the snow, could only be described as the epitome of joy. Teddy’s left front paw was misshapen from birth with too few claws in all the wrong places. This malformity didn’t slow him down, though. In his own way, I think it actually lent itself toward a strength. Teddy’s hugs, for example, were incredible. His paw curved in at what could be considered the wrist, which allowed him to wrap his arm around me when I pulled him close. He was an unforgettable companion.

Teddy also suffered from a great deal of anxiety. At first, he seemed normal if not fully delightful, when he waited for my return home from school with bated breath. He barked when I came inside and hopped around my legs, licking whatever part of me he could. When I moved away to go to college, the anxiety began to surface in terrifying and often frustrating ways.  When I would come back to my parents home for extended periods of time, I rarely saw my dog resting as he usually seemed nervous about something or another. While I was gone, Teddy would become frantic when left alone at the house. We think that he was trying to find me, but it was not normal. On more than one occasion, Teddy was so desperate to escape that he bloodied his own mouth and paws on doors and their frames. At the time, we tried everything we could think of, every suggestion given by our vet, oils we didn’t even understand at the time, and whole lot of prayer. Unfortunately, the anxiety did not go away.

October 22, 2013 was a Tuesday. Ironically, it was the same day of the week that my first dog, Sadie, had been killed by a car. My parents called in the evening to say that they had taken Teddy to the vet that day. Dr. Williams told them that it was likely that Teddy had multiple cancers in his body. That he’d probably had them for a long time and he was suffering badly (one possible reason for Teddy’s struggles with anxiety). The previous week he had begun to lose significant motor function. Buddy, our other dog, had also tried to alert my family. Possibly because he could smell the sickness in Teddy. The call had hardly started when my senses shut down. My mom said, “…it’s Teddy…” and I didn’t hear anything else. The tears came like waterfalls and I just couldn’t hear anything. I could hardly muster a word.

“I was reminded again today when I tossed an empty toilet paper roll into the trash can. Teddy loved to chew on those. I thought for a moment that I would retrieve it and take it back to my parent’s home with me for the holidays. I thought, “Oh how Teddy will love that!” But, then I remembered, Teddy won’t be there. He won’t be there nuzzle my leg roughly as if to hug me. He won’t be there to greet me with loud whines and kisses. He won’t be able to hop around in the snow with excitement or pull on Buddy’s ear to play, or to tear apart that toilet paper roll. He won’t be there because he went to sleep and woke up somewhere else… my Teddy is no longer alive. It has taken me exactly one month to write that… and to let myself just cry. There’s really not much to write. I just really miss him. It is so hard to think that he won’t be there. That he just isn’t there. At that moment, that day, that week, that month – right now – I just need a left pawed Teddy hug and I know I’ll never have another again. I will never get to see my Teddy again.”

The loss of a beloved pet is one of the hardest things I have ever experienced. It is the loss of one who loved unconditionally and was there when it seemed like no one else was. It is the loss of a helper, a tender teacher, a faithful listener, a friend. It’s the changing of lovely memories into sad remembrances because of obvious absence. It’s the creation of sacred moments that once seemed inconsequential. Today, I remember my grief for Teddy less frequently than I once did, and the reality of his absence affects the tone of my day much more subtly than it did when the cut was fresh. Yet, the unique type of grief I experienced when my Teddy left this world is not something I expect to ever forget.

Every once in a while, I like to imagine something sweet concerning my lost loved ones. Today my mind’s eye paints a picture of my beloved ones playing together. The snow is glistening in Heaven’s fields as Sadie, Teddy and Buddy romp around. Eric is sharing a cigar with my Grandpa Burkes, and they’re laughing while they watch my friends’ children build snowmen. Everyone is happy, worshipping Jesus as they delight in His perfect creations. And Jesus Himself is smiling, overjoyed to hold these dear ones close to His heart in His home. 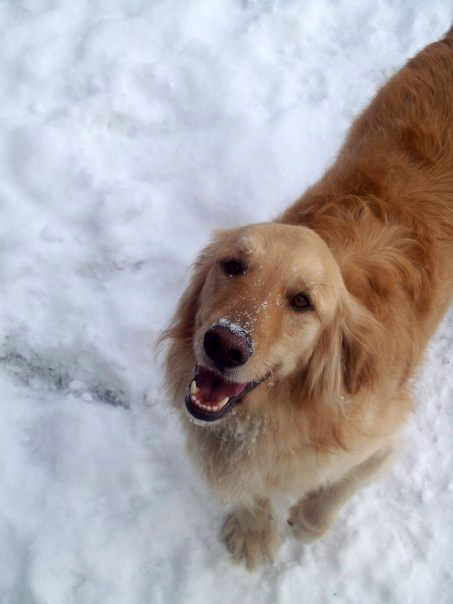 “A person can learn a lot from a dog, even a loopy one like ours. Marley taught me about living each day with unbridled exuberance and joy, about seizing the moment and following your heart. He taught me to appreciate the simple things-a walk in the woods, a fresh snowfall, a nap in a shaft of winter sunlight. And as he grew old and achy, he taught me about optimism in the face of adversity. Mostly, he taught me about friendship and selflessness and, above all else, unwavering loyalty.”- John Grogan, Marley & Me

Lizzie Lindberg is a Mama to two little boys, a widow, and a lover of words & coffee. As a part-time communications director and graphic designer at her church, she is excited about cultivating creativity and consistency. When she's home, Lizzie excels at making mayonnaise, composing dinosaur noises, and crafting lego spaceships. Lizzie writes about motherhood, grief, and God's faithful love. View all posts by Lizzie Lindberg

Elizabeth Rayford writes & designs from rural Minnesota - usually while her husband works upstairs and their boys adventure in the backyard. She enjoys a good cup of coffee, new music, essential oils and non-fiction. As an Enneagram 3w2, Elizabeth desires to see her loved ones thrive, finds joy in accomplishing tasks, and appreciates the best of just about anything.