The eager fate which carried thee
Took the largest part of me:
For this losing is true dying
– Ralph Waldo Emerson

Sometimes tragedy shakes the structure of life so completely that nothing looks the same when the dust settles. When my life-altering, pivot-point tragedy occurred, I never could have imagined all of the ways that I would change as a result of it. Though the very deepest parts of my identity did not change; my value, my worth, and the meaning of my existence… I am certainly not the same person I once was.

Change is sometimes very good. It can be beautiful, and is generally a natural part of growth. Yet, it can also be painful, ugly, and contrary to everything that seems right. Some changes are both wonderful and terrible. Whether for better or for worse, whether fully or only slightly, there is now a loss of the way that things were. When that change occurs as a result of a primary loss, it becomes a secondary loss. Today, I’m talking about the specific secondary loss of who I used to be.

I tend to think of my life as before-loss (BL) and after-loss (AL). Nothing has been more of a turning or measuring point in my twenty-seven years of life than the death of Eric – husband, father, and friend. Before he died, I carried many titles that were relational to him (married, wife, pastor’s wife, etc.). My lifestyle and surroundings were the way that they were in large part because he was in them (SAHM, homemaker, Wisconsinite). In several ways, my humor, preferences, and parts of my personality were the way that they were because of my relationship to and lifestyle with him – we balanced each other. My perspectives, beliefs, and expectations were also much different than they are now – which has more to do with the fact that I faced significant tragedy and trauma than it has to do with what specifically happened. 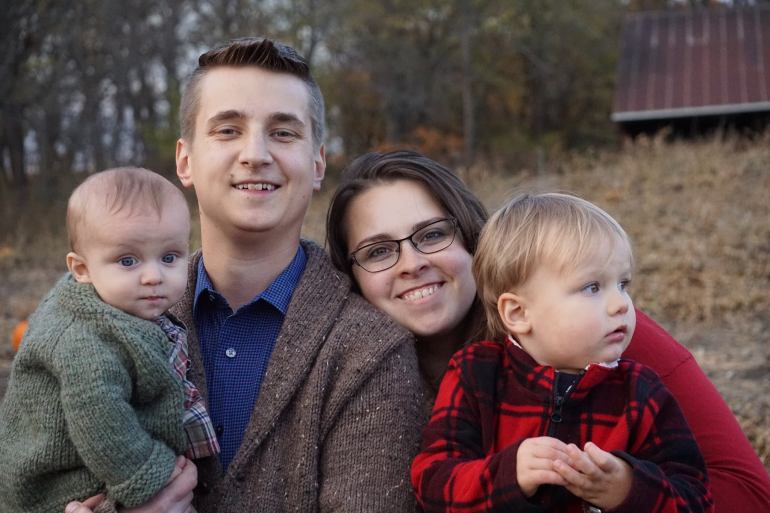 Immediately following Eric’s death, I was in severe shock. My close friends and family told me that for at least six months my eyes were glazed as if I was not fully present. And I honestly probably wasn’t. I remember very little of those first few months – which is terribly painful to think about, because in those six months my children were growing and developing… I missed precious time with them. Most of the changes that surfaced in me during that time weren’t fully permanent, but they were a sign that things would likely never be the same. Recently, one of my friends recalled it like this:

About 6 months from when Eric died, I remember getting really upset that I had lost my friend. Not that you were gone. But you were so absolutely different. And understandably so. And I would say parts of that person I was missing have returned. But not entirely. (And now I not would trade back for that other version of you if given the option.). But at the time it was this realization that everything had changed forever and that meant my friend had changed forever. And I missed how easy and free things had been.

Immediately following loss, everyone grieves and it is very healthy to do so! There is no right or wrong way to go about it… each grieving process is as unique as the individual and the relationship. But sometimes, the action of mourning morphs into an identity: the grieving person becomes a “griever.” I remember saying on especially difficult days that I was nothing more than a griever. I even hoped I would never stop grieving, because in my mind continuing in that identity meant that I was closer to Eric. And the thing is, I will never not be Eric’s widow. But the truth is that I am neither closer nor further away from him because of the way that I feel. Eric is the memories that I have of and with him, the ways that he helped me to grow as a person, the ideas that he left behind, and a whole list of intangible other things: but he is not the sadness. I spent quite a while in that space with that description of myself, but there came a time when I was ready to move forward from it. Letting go of the label of “griever” did not mean forgetting about Eric, but it was releasing the intense pain that characterized and overshadowed every other area of my life.

A new identity; another me

The trauma and loss that I experienced will always be part of my story. I don’t think it would surprise anyone for me to say that I am still very sad from time to time. And since everyone changes throughout life, it would be difficult to say for sure that the changes in me are because of the loss I experienced. Or that if Eric were still alive I would not be the way that I am today. But I don’t have those “what-if’s”… what I have is who I am right now and a comparison to who I used to be.

For the most part, the deep grieving has been replaced with a strong desire to recreate my surroundings – to own my titles, claim my priorities, call my family whole, and encourage others to do the same. It hasn’t been easy: learning to do the things on my own that I used to do with a partner is like operating my body after an amputation.

I have been asked, “how do you do it?” And I have three answers for that.

1. I have children whom I love and want to thrive. They need their mom.

2. I want to keep moving. I enjoy the things that I have built into my life. Enjoying what I have in my life now does not mean I am not sad that Eric is not.

3. It is not on my strength alone that I do anything. My God is faithful to provide for me in every way, including through the people around me in my awesome support systems. So I move forward with help and grace.

When someone experiences trauma, they can’t help but be affected. Often people suffer significantly, and end up having to deal with PTSD, severe depression and anxiety, and a host of other debilitating and life-altering things. Other people try to “bounce back” to the state that they were in pre-loss. In their book, “Option B,” Adam Grant and Sheryl Sandberg wrote about a third option; post-traumatic growth.

[Post-traumatic growth] is about emerging with some positive change from a negative event. That’s not to say that the grief or sadness goes away, or that anyone is happy that it occurred. But alongside those negative emotions often come improvements in people’s lives, where they’re able to say, “I’m stronger. I lived through that, I can live through anything. I’m more grateful…”

Because of the things I have taken on as my kids’ only parent, I am a stronger parent. The choices I have made on my own for where, how, and when my family will live, have made me more certain of them and have helped me to gain confidence in myself as well. Post loss I find great purpose in helping others on their own journeys toward health and that is another prompt for forward motion. Armed with the first hand knowledge that life is short, I have made a more intentional effort to build and maintain relationships with those closest to me.

Of course I miss Eric. Especially when my boys go through a special milestone and their dad isn’t there to see it; especially when new technology or media comes out that I know he would love; especially late at night when I can’t seem to fall asleep. I wonder what I would be like if he were still standing next to me. I am choosing, however, to see my current life as a series of secondary gains. I am grateful for the faithfulness God has shown in growing me into the person I am today.

Healing is hard work. It takes patience, trust, and determination. There is no timeline, so you can’t rush it. What you can do is move forward at your own pace if you desire to be healed. Healing from grief does not mean that you are forgetting the one you have lost, or that you will never be sad for them. Instead, it means continuing to live but letting go of intense and even debilitating pain. Here are some prompts that may help you on your journey toward healing:

How would you describe yourself before the loss of your loved one (titles, body, mind, emotional state, perspective, character, etc.)?

How do you think you have changed since your loss?

In what ways do you hope to continue changing?

If you’re struggling to move forward, have you considered whether it is because you need more time to grieve or whether you might be afraid to leave your loved one behind?

Featured Photo by freestocks.org on Unsplash

Lizzie Lindberg is a Mama to two little boys, a widow, and a lover of words & coffee. As a part-time communications director and graphic designer at her church, she is excited about cultivating creativity and consistency. When she's home, Lizzie excels at making mayonnaise, composing dinosaur noises, and crafting lego spaceships. Lizzie writes about motherhood, grief, and God's faithful love. View all posts by Lizzie Lindberg

3 thoughts on “Secondary Losses: The Me I Used To Be”

Elizabeth Rayford writes & designs from rural Minnesota - usually while her husband works upstairs and their boys adventure in the backyard. She enjoys a good cup of coffee, new music, essential oils and non-fiction. As an Enneagram 3w2, Elizabeth desires to see her loved ones thrive, finds joy in accomplishing tasks, and appreciates the best of just about anything.